The double-decker City Tour hop-on hop-off bus is one of the most convenient and comfortable ways to go sightseeing in London. The City Tour company offers London hop-on hop-off tours with 70+ bus stops near the city’s top attractions and landmarks.

Hop-on Hop-off bus tours allow you to explore all of the city’s exciting offerings hassle-free. Hop onto one of their buses and hop off at any of the numerous stops to take a closer look at desired attractions.

London City Tour offers over 70 stops across numerous routes with comfortable coaches. It is one assured way of ensuring that you have a comfortable experience sightseeing while you save on money and time!

The London City Tour Hop-on Hop-off bus routes are designed so that their stops are within close walking distance of the city’s major landmarks, attractions, and monuments.

Even of you don’t wish to get on and off, you can get an overview of the city by just sitting in the bus and travelling the different routes.

It is an excellent way to avoid the stress and expense of planning your transportation in a new city. City Tour HOHO buses have well-planned fixed routes that make it easy to plan an itinerary.

With London City Tour you can listen to pre-recorded commentary in 10+ languages to learn about the history and interesting facts of the attractions as you pass them.

Flexible Cancelation Policy: Get a full refund on canceling this ticket up to 24 hours in advance.

Flexible Cancelation Policy: Get a full refund on canceling this ticket up to 24 hours in advance. 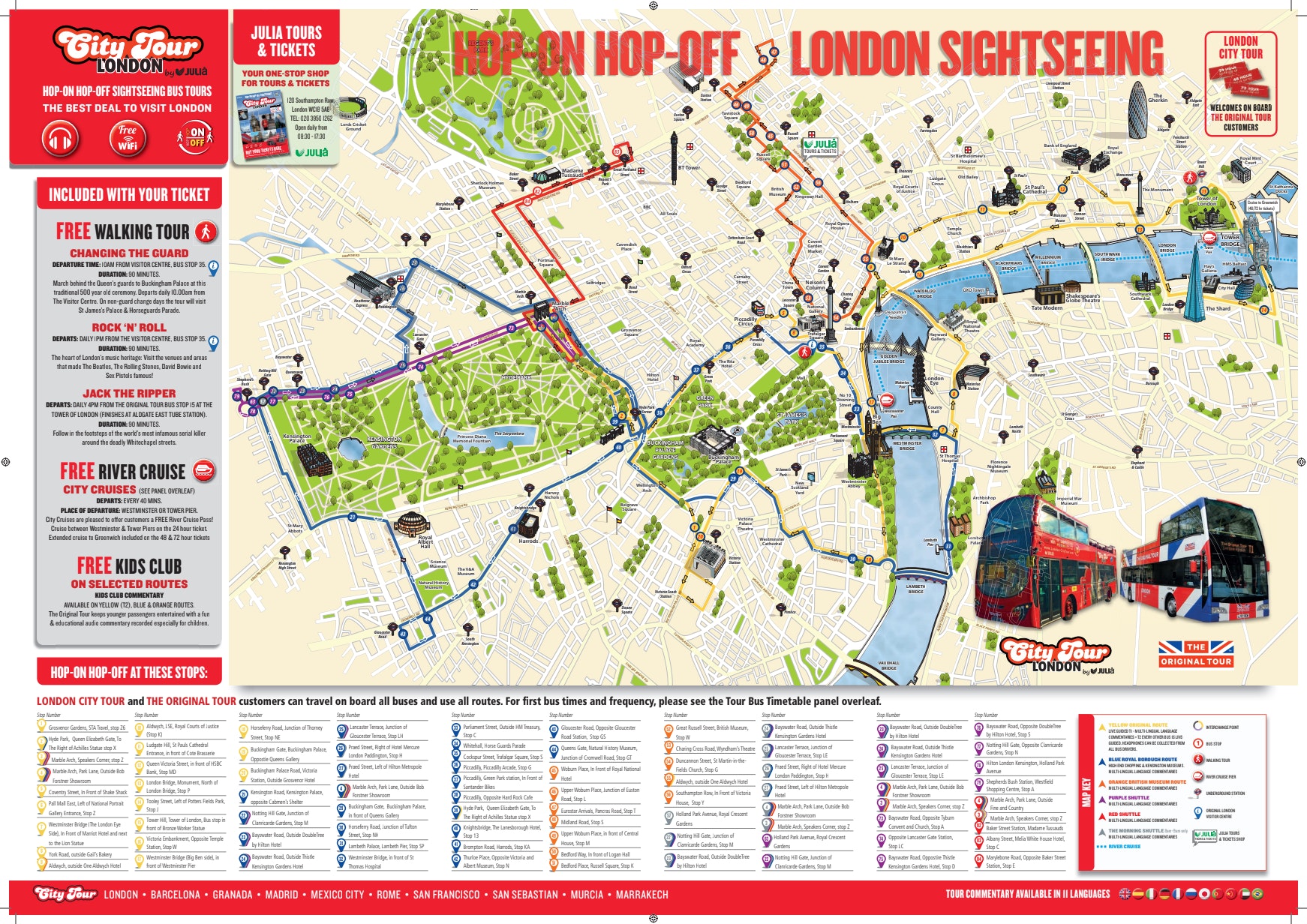 The Yellow Route takes you to all the main Central London landmarks, including the Tower of London, Trafalgar Square, St Paul’s Cathedral, London Eye, The Shard, Tower Bridge and Leicester Square, and more

The first bus starts at Grosvenor Garden at 8:30 AM and the last bus is at 6 PM.

The Orange Route is perfect for visitors that want to see the best of North London. Stops include the British Museum, the British Library, King’s Cross Station, Chinatown, and Covent Garden.

The first bus departs from Woburn Place at 8:35 AM and the last bus is at 5:30 PM all year round.

The Blue Route is perfect for visitors that want to see the best of Central and West London. It covers Kensington Place, Royal Albert Hall, Buckingham Palace, Westminster Abbey, and the London Eye.

The first bus departs from Kensington Road at 8 AM and the last bus leaves at 6 PM.

This Morning pick-up shuttle service is a way for you to conveniently get from West London, Bayswater, Notting Hill, Holland Park and Paddington, to Marble Arch in Central London.

The Red Shuttle will take you from Marble Arch to Regent’s Park and back, while the Purple Shuttle is a way for you to travel from the hotel region of West London, including Holland Park, and Notting Hill to Central London.

This complimentary one-way River Cruise takes you down the River Thames. It departs from Westminster Pier or or London Eye Pier, and stops at Tower Bridge Quay near The Tower of London, and at Greenwich Quay.

The first boat departs from Westminster Pier at 9 AM the last one leaves at 5 PM.

Highlights of the Barcelona Hop On Hop Off Bus Tour

St Paul’s Cathedral is one of Europe’s largest cathedrals Listen to the haunting acoustics in the Whispering Gallery and soaking in the breathtaking views offered by the Stone and Golden Galleries.

Visit the Queen’s residence at Buckingham Palace. Stroll through the vast palatial gardens and witness the Change of Guards ceremony, at this treasure trove of royal experiences.

One of the UK’s most important religious buildings, Westminster Abbey the burial and memorial site of writers, actors, scientists, thinkers, and other famous historical significant figures.

Parliament Square has some of the capital’s most iconic buildings including Big Ben, the Houses of Parliament, Westminster Abbey, and statues of famous leaders and historical figures.

Experience a breathtaking view of London from atop the 443-feet high London Eye observation wheel located near the River Thames,  for a unique perspective of London.

Explore the beautiful River Thames on a  River Cruise. Travel under the London Bridge, see the Houses of Parliament, Big Ben, and admire the Festival Hall and the London Eye.

Home to lifelike wax figures of over 250 celebrities,at  Madame Tussauds you can see the Royal Family, Benedict Cumberbatch, James Bond, and more.

Q. What is a London City Tour?

A. City Tour is one of the top hop-on hop-off tours in London.

A. Hop-on hop-off buses are tourist buses that allow you to board and leave whenever you like and sightsee at your own convenience.

Q. How much does a London City Tour hop-on hop-off bus cost?

A. There are multiple hop-on hop-off bus tours, most of which begin from £40.

A. London City Tour hop-on hop-off bus tours run at a frequency of 15 to 30 minutes.

Q. How many London City Tour routes are there?

A. There are three City Tour bus routes in London - the yellow, blue, and orange tours. There are also three shuttle routes - red, purple, and silver.

A. Yes, you will get access to audio guides available in up to 11 languages to learn more about the city.